In today’s digest we bring you articles on Can YOU Pass the New Army Fitness Test?, 25 Songs that will help you be fit according to science, 10 Nutrition Rules to Follow if You Want to Build Muscle and Tip: To Lose Fat and Keep Muscle, Time Carbs Like This. Hope you enjoy them…

Can YOU Pass the New Army Fitness Test?

The APFT is conducted during the soldier’s initial entry/basic training and then at their unit every six months. The soldiers do this test collectively, usually at the platoon level (that’s a team of about 30-50 soldiers). Diagnostic testing may also occur during deployments to combat zones and other countries, but these don’t involve testing “for record.”

This new test is a huge step in the right direction. The old APFT may have been logistically simpler to implement, but it lacked the testing of critical physical skills that the new ACFT measures: power, absolute strength, and anaerobic conditioning. Also, unlike the old APFT, the ACFT is gender neutral – there won’t be different minimum standards for females or males.

Understanding specifically what the ACFT is testing will help soldiers understand how to train for it. And if you’re not planning on enlisting, it would still be a “fun” way to test your readiness.

This test is a display of your absolute strength. Bodyweight circuit training isn’t going to cut it for this one! Being absolutely strong is a practical thing – picking up heavy artillery shells, throwing an M2 .50 caliber machine gun over your shoulder, or climbing over a wall while wearing 100 pounds of kit and body armor isn’t going to happen without some raw strength. You’re going to need to spend time in the gym lifting weights… heavy weights.

2 – Standing Power Throw: 10-pound medicine ball thrown over and behind the head

Throwing a grenade, jumping over a ditch, tossing an ammo can to the gunner, kicking down a door – all of this requires the ability to generate force with high velocities. You need to be explosive and violent. Sharpening your reflexes and focusing on plyometrics and a few weighted movements are going to be your best bet – things like different varieties of jumps, throws, slams, swings, and Olympic lifts.

3 – Hand-Release Push-Ups: as many as possible in two minutes

If the soldier already has a level of general, absolute strength, then this event will be a test of muscular endurance. However, when a soldier is extremely weak, this becomes a test of their strength, and soldiers need to train accordingly.

This is a new form of conditioning for the Army, yet it’s the most representative of what soldiers might see on a battlefield: sprinting to cover, dragging your buddy to safety, carrying ammunition 50 meters to the front.

This test requires anaerobic conditioning, so being a good distance runner isn’t going to cut it. You need lots of muscle and lots of stored glycogen. Development of this type of conditioning requires a combination of “resisted” training like farmers walks, yoke carries, sled drags/pushes, and buddy/log carries, along with “unresisted” training like various sprints and bear crawls.

Like the hand-release push-up, the leg tuck is going to be an endurance test for some and a strength test for others. Generally speaking, the smaller guys are going to see this as endurance training whereas the big boys will have to look at this as part of their strength training.

Everyone who hates to run pulls the old “I’ll never need to run for two miles in combat” card, but they’re missing the point. This test evaluates aerobic capacity: overheat and seize up, or run cool and efficient under high stress and nasty hot weather.

I’ve seen plenty of big boys drop out as heat casualties while their weaker, yet longer-distance running counterparts kept chugging along in temperatures of 145 degrees.

There needs to be a healthy balance.

How to Prepare for the ACFT

The best approach to training is to create training slots that are themed for each aspect of performance. That allows you to stay organized while forcing the body to adapt.

A common mistake is to “cross contaminate” the different performances in an attempt to make it harder. Unfortunately, when it comes to adaptation, all this is doing is robbing Peter to pay Paul. Keep the cross-training to a minimum and focus on development.

Here are the training themes you’ll need to hit:

With the organization established, it’s time to define who you are. Does a light infantryman need to be trained like a heavy mechanized artilleryman? No. So I’ve provided two basic breakdowns, the first for the soldier that needs a conditioning bias and the second for the soldier who needs a strength bias.

Both will get you to pass the ACFT with flying colors, but more importantly, choosing the one appropriate for your role will get you in the shape you truly need to be in to fulfill your warrior duties.

Save 10 minutes at the end of your training session for an aggressive body weight smoke-session. As an example, do a few rounds of the following circuit for 10 minutes:

This is the last training day of the week, so leave it all out there.

The Army is trying to make a new soldier. Don’t get left behind. Get organized, get focused, train hard, and become the modern super soldier.

Related:
Soldiers Should Juice Up

Can YOU Pass the New Army Fitness Test? was originally published at https://www.t-nation.com/training/can-you-pass-the-new-army-fitness-test?utm_source=facebook&utm_medium=social&utm_campaign=article8463

25 Songs that will help you be fit according to science

Do you listen to music? How does that music help your health? As in turns out there are certain songs that can help you in your workout and that’s according to science. Integrating music to your workout has already been proven to increase the effectiveness of your routine but as it turns out not all …

Do you listen to music? How does that music help your health? As in turns out there are certain songs that can help you in your workout and that’s according to science.

Integrating music to your workout has already been proven to increase the effectiveness of your routine but as it turns out not all songs are created equal in terms of the efficiency that in can bring to you.

First you need to identify what kind of a person you are. As ABC News found out there are two types of people who exercise: associator and dissociator. The first one do not like music and can do their work out in silence since they focus on their heart rate, breathing, and muscle tension. The other one, dissociator are those that focus to anything that can distract them from the hard work – like music. And if you’re a dissociator, there are certain songs that can help you do your workout more efficiently.

Dr. Costas Karageorghis of Brunel University, London said that listening to music can result to a more intense workout and can boost your endurance by up to 15%. That’s not a small number and that’s the very reason more and more people have their earphones stuck up their ears as they sweat out.

There is of course a good song to listen to while doing your thing. Karageorghis suggested selecting a song that has between 120-140 BPM (beats per minute) and those that carry motivational and inspirational lyrics. If have no idea on those songs, he has a list right below:

25 Songs that will help you be fit according to science was originally published at https://www.stethnews.com/0420/10-songs-that-will-help-you-be-fit-according-to-science/

10 Nutrition Rules to Follow if You Want to Build Muscle

Bodybuilders, trainers and diet gurus alike (at least those worth their salt) will tell you that bodybuilding is more than 50% nutrition. We tend to agree, especially where the novice is concerned. Beginners or those heading back into the gym after a layoff can expect to make some serious gains in strength and mass from … 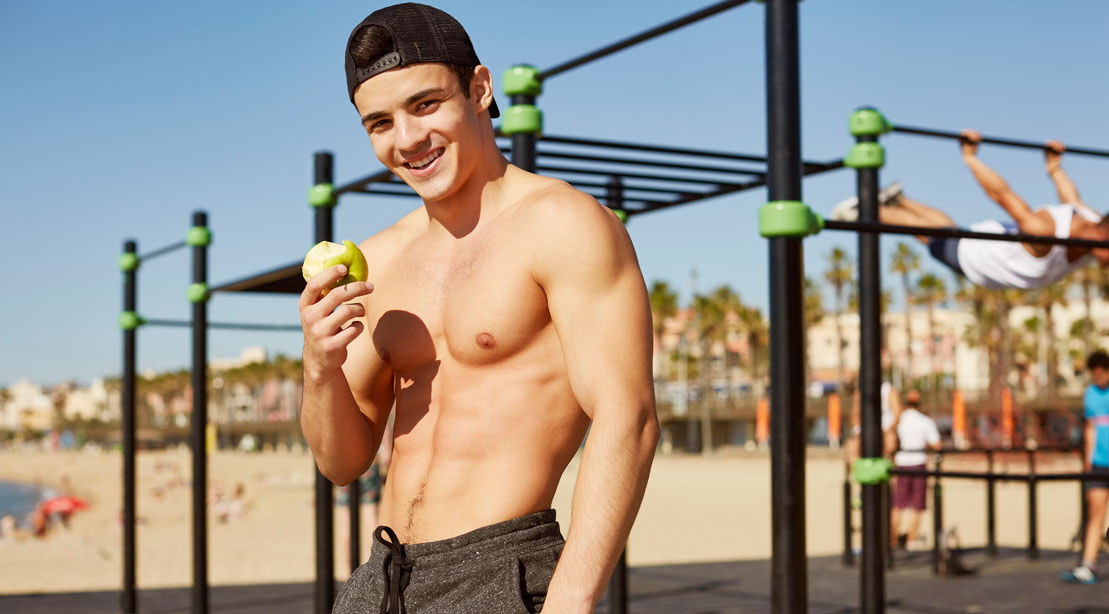 Bodybuilders, trainers and diet gurus alike (at least those worth their salt) will tell you that bodybuilding is more than 50% nutrition. We tend to agree, especially where the novice is concerned. Beginners or those heading back into the gym after a layoff can expect to make some serious gains in strength and mass from a regular training program, but not without a solid nutrition program.

Bottom line: The more serious you are about your nutrition, the more serious your gains will be. In fact, if you combed the literature on weightlifting, you’d quickly learn that relatively little research has been done on training techniques for boosting muscle mass and strength compared to the tons of studies on the effects of nutrition and dietary supplements. Said research shows that paying attention to macronutrients (protein, carbohydrates and fat), calories, meal timing and certain supplements will have a huge impact on your results.

But because you don’t have time to do all the combing yourself, we’ve boiled it down to 10 basic nutrition and supplement rules that every beginner should learn now and maintain indefinitely. Follow these rules and stick to your lifting program, and soon that “beginner” label will no longer apply to you.

10 Nutrition Rules to Follow if You Want to Build Muscle was originally published at https://bit.ly/2Zs3TEi

Tip: To Lose Fat and Keep Muscle, Time Carbs Like This

How to manipulate insulin production to get shredded while still fueling and recovering from tough workouts. by Mitch Calvert If you want to lose fat, keep insulin at bay during inactive times. Sure, insulin is a potent inducer of amino acid uptake and protein synthesis, which makes it key to a muscular physique, but it’s …

How to manipulate insulin production to get shredded while still fueling and recovering from tough workouts.

If you want to lose fat, keep insulin at bay during inactive times. Sure, insulin is a potent inducer of amino acid uptake and protein synthesis, which makes it key to a muscular physique, but it’s a double-edged sword.

Insulin is effective at driving carbs into muscle and liver tissue (good), but it’s also equally good at directing carbs into fat tissue (bad). To get the best of both worlds, skip the carbs at breakfast and during the early part of your day if you train in the late afternoon or evening. Instead, opt to replace carbs with healthy fats and keep your protein intake constant. This means something like an omelet with spinach instead of a carb-laden breakfast.

That said, we don’t want to catabolize muscle and end up looking like a dude fresh off Weight Watchers. When your workout comes around, introduce carbs to maximize recovery.

One study found that 50 grams of carbs in a workout drink consumed during a resistance training session completely eliminated cortisol elevations compared to a control drink. Subjects within this study with the lowest cortisol – and the greatest muscle gains – were entirely from the group who drank the carb drink, whereas subjects tested with the highest cortisol showed the least gains. (One placebo participant on the control drink even lost muscle size during the study.)

You want a workout nutrition drink (such as Plazma

) containing cyclic dextrin and fast-acting di- and tripeptides that digest quickly and turn on protein synthesis. Then you can follow up your workout with some complex carbohydrates – maybe even some fun ones in moderation – when your muscles are most sensitized to absorbing them.

Tip: To Lose Fat and Keep Muscle, Time Carbs Like This was originally published at https://biotest.t-nation.com/articles/tip-to-lose-fat-and-keep-muscle-time-carbs-like-this?utm_source=facebook&utm_medium=social&utm_campaign=article